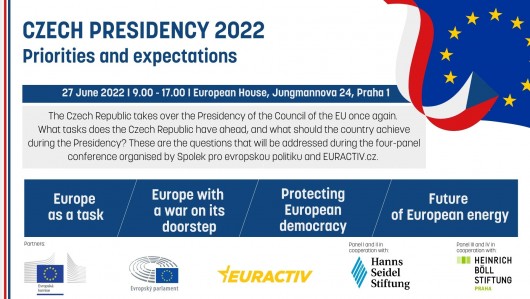 Europe as a task
The Czech EU Presidency begins. Has the government devoted sufficient time and personal capacities to the EU Presidency organisation? What are Czech ambitions, and what should the Czech Republic achieve within the EU Council?

Europe with a war on its doorstep
The war in Ukraine is a lesson for the whole continent, after which many countries have decided to increase their defence investment commitments. What potential has the cross-border cooperation? How to strengthen the EU's defence capabilities in light of the war in Ukraine? And how to ensure the cyber security of European states?

Protecting European Democracy
Resilience of democratic institutions is one of designated key priorities of incoming Czech presidency of the EU Council. With focus especially on media pluralism, Czechia is going to lead talks on Media Freedom Act, which European Commission plans on presenting at the start of Czech presidency. What role should the Czech Presidency play in this respect?

Future of European Energy
Decarbonisation and reducing dependence on Russian fuel imports are the two main challenges for the European energy sector. How to achieve affordable and clean energy in the shortest possible time? Does the EU have examples of good practice for effective instruments to secure energy rights and eliminate energy poverty? Are the European Commission's plans acceptable to the Member States, and will the Czech Republic be able to find a consensus?

Online and at the European House in Prague
Jungmannova 24, Prague, Czech Republic