Media Partnership - One step for energy transformation, a huge leap for Central and Eastern Europe (CEE) 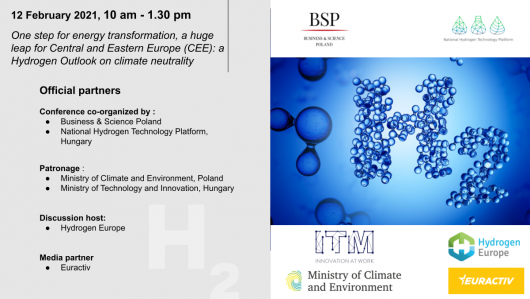 One step for energy transformation, a huge leap for Central and Eastern Europe (CEE): a Hydrogen Outlook on climate neutrality

Given the European Green Deal aim of climate-neutrality by 2050, there cannot be a full transition without the decarbonisation of the energy sector in Europe, which accounts for 75 % of greenhouse gas (GHG) emissions. In order to facilitate the technological development and upscaling of the use of hydrogen from renewable and low-carbon resources, the European Commission on adopted 'A hydrogen strategy for a climate-neutral Europe' on 8 July 2020. Hydrogen is perceived as the key enabler of the decarbonisation of the industrial processes and economic sectors, especially where the renewable electrification is not fully possible and other alternatives may yet not be feasible.

First half of the 2021 will materialise the Fit for 55 package: the EU’s ambition to deliver on one of its key priorities with focus on new legislative initiatives and revisions of the existing fundamental legislation. The challenges, however, still remain. Today, most of the hydrogen production is fossil-based as clean or low-carbon hydrogen is not yet available in sufficient quantities nor is economically-viable. Furthermore, the reliance on fossil-based energy-mix still varies significantly between the EU countries. The share of hydrogen in Europe’s energy mix is expected to expand from the current less than 2% to 13-14% by 2050.

In 2020, the political foundations to meet the hydrogen ambitions in the EU have been laid after much anticipation. The pool of funds and investment opportunities available for the hydrogen projects will be significantly reinforced mobilising both public and private investments including the recovery instrument the Next Generation EU. The European Clean Hydrogen Alliance provides the framework of private and public sectors involvement. According to available studies, the demand for hydrogen in the European Union already in 2030 will rise, up to 665 TWh (16.9 million tons), which is almost double as compared to the current consumption. Thus, there is an urgent need to increase the hydrogen capacity in the EU as only 26% of the clean hydrogen demand will be produced in the Member States according to the predictions presented in the study. The European market offers excellent potential for increasing the renewable and low-carbon hydrogen capacity in Europe as current estimations of Hydrogen Europe already envisage that 118 TWh of clean hydrogen will be imported.

With the following programme of the panel discussion, we provide a view on these key developments from the CEE regional perspective. We would like to draw your attention to the dynamic and prospects for the energy transition accelerated by hydrogen in the Central and Eastern part of Europe.

The contributions will focus on answering the following questions:

- Designing a roadmap for the EU. What is needed to increase the hydrogen consumption and build competitive market for hydrogen? Are specific quotas and targets needed to boost hydrogen demand and consumption?
- How to shape new policies and legislation respecting the differing starting points and technological neutrality?
- Building new legal framework supporting hydrogen market. Will fossil-based, low-carbon and nuclear energy-based hydrogen be secured in the upcoming legislative package?
- What are the priority areas and key actions for successful integration of hydrogen in energy, industry and transport sectors? How to incentivise both the supply and demand for renewable hydrogen and bridge the gap between conventional, low-carbon and renewable solutions?
- How to steer the development of key pilot projects? How to finance massive investment needs while respecting contrasting predicaments of MSs?


The discussion will be hosted by Business & Science Poland (BSP) and the National Hydrogen Technology Platform Hungary (NHT). The event is kindly facilitated by form of a partnership between the Ministries of Energy and Climate (relevant for the energy transformation and the hydrogen policy) in V4 countries. The discussions will be moderated by Jorgo Chatzimarkakis, Secretary General of Hydrogen Europe.

Under the patronage of:
Ministry of Climate and Environment, Poland
Ministry of Technology and Innovation, Hungary